Third seminar of the term!

The Enemy Within: The Function of the Witch-Queen in Old Norse Literature 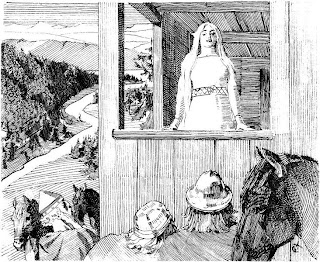 The paper will examine Old Norse presentations of the witch who is married into a royal family: she is culturally 'other' yet brings her alien power into the centre of society, and her actions serve to weaken or destroy the royal dynasty and the community that surrounds it. The focus will be on the figures of Drífa, Hvít, Snæfríðr and Gunnhildr in Ynglinga saga, Hrólfs saga kraka and Haralds saga hárfagra, but other material will be drawn in.

It will be demonstrated how the literary representation of the Witch-Queen reflects the anxieties of society, including the non-royalist society of commonwealth Iceland, concerning masculine authority and feminine challenges to it. The paper will examine the manner in which the situation of an ideal royal bride is inverted: rather than being a powerful support for the king and a provider of heirs, the Witch-Queen saps his power, enfeebles his masculinity and weakens his line. She is a literary creation that acknowledges the vulnerability of masculine dynastic hopes and serves as a means of expressing the negative possibilities of the complex sexual politics surrounding royal power. It will, furthermore, be demonstrated that the evolution of her character can be traced back to the trollish figures of the Norse mythic background. It will be argued, in conclusion, that the solution offered by the literature is that a king must be in a position of sexual liberation and dominance in order to resist successfully the influence of what the Witch-Queen represents.

David Varley is a PhD student working in the field of Old Norse. He received a BA (First Class) in English Language and Literature from the University of Leeds in 2009, when he was also awarded the Canon Purvis Prize for gaining the highest overall third-year score among students in the School of English. In 2010 he received an MA (Distinction) in Medieval and Renaissance Literary Studies from the Department of English Studies, Durham University, where he was awarded the McKinnell Prize for the highest achieving medievalist at Masters level.

David's undergraduate dissertation examined the use of animal symbols in conceptualising aspects of death in Eddic poetry and saga literature, and his MA dissertation examined the representation, function and impact of regal witches in saga literature. Building on these studies, at PhD level he is working more widely on the representation and negotiation of female power in Old Norse texts, with special emphasis on the fornaldarsögur (sagas of ancient times) and konungarsögur (kings' sagas). In particular he is seeking to establish connections between the scenarios of mythological material and the construction of social reality in the sagas.

Posted by Inventions of the Text